Naked Cow Jerky was started by Ron Myrick and Doug Labb, 2jerkys who met in college and began experimenting with making beef jerky to share with friends on camping and canoe trips starting in the late 1990s. In 2011, 2jerkys launched our original beef jerky company, Appalachian Jerky (appalachianjerky.com), to develop bold beef jerky varieties that catered to targeted tastes for a larger audience. This was an exciting time for us!

In 2013, after Ron decided to eat a more Paleo-friendly diet, 2jerkys developed a variety of Appalachian Jerky called Primal Smoke which eliminated the use of soy, sugar/corn syrup, and artificial preservatives. Demand for Primal Smoke was strong including many Cross Fit gyms in the Boston area. Building off the success of Primal Smoke and working with a group of business students as the subject of a class at Northeastern University, 2jerkys developed the vision for Naked Cow Jerky in late 2014 with the goal of developing a tasty beef jerky sourced from cows that were fed exclusively a grass diet and contained no “udder” stuff. It took us almost a year to get it done right, and the initial production batch of Naked Cow happened in September 2015. Our vision was realized – delicious, tender, natural and clean beef jerky made with only ingredients that you would find in your spice cabinet (well, except the cow)!

We’d love to hear from you with any suggestions and comments (jerky@2jerkys.com). Also, send us photos of you enjoying Naked Cow. We’ll probably throw you a discount coupon code or something for such an act – it makes our day!

Want to know more about the minds behind the meat? Interested in carrying our brand in your store? Click here to go to 2jerkys.com 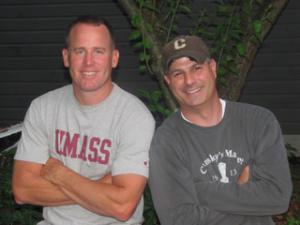